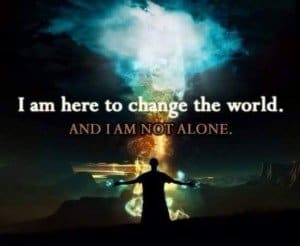 Are you ready for a quantum leap into what can be? The New Moon at 20 degrees of visionary Aquarius is asking us to look to the future, not remain in the past. This is a very important election this leap year here in the USA. Our old political, economic and religious structures are breaking down. So the question is, do we want to try to hold on, try to fix what is broken? Or is it time for a new vision, one that is more in alignment with the Age of Aquarius that we are entering, one of love, equity and freedom to be who each of us really is? We are being called upon to have the courage to believe we can have something different, that a new paradigm can manifest here on Earth.

Aquarius reminds us of the power of the group, that we are much stronger and have more impact when we work together. As we move into the Age of Aquarius, we become more and more aware that as the Hopi Elders say, “We are the ones we are waiting for.”  We are all in this together. There is no savior coming. A movement to create a better world is  occurring now and we must work together to make it happen.

Aquarius is the revolutionary and this is a revolution of the heart, a shift in consciousness. We have seen that when something reaches critical mass, things change rapidly.  I recently had a dream where I was with a group of people and we were “storming the Bastille.” There is nothing more symbolic of revolution than this image from the French Revolution, relating to the great inequities of that time. In my dream there was no violence, just an incredible amount of excitement over the coming changes. I felt this dream was symbolic of freeing myself from what has felt like a prison, the barriers to love.

The Sabian Symbol for Aquarius 20 degrees is “A large white dove bearing a message.” Doves are often symbols of inspiration and divine guidance. Doves are said to be able to perform miracles with their messages. We are in a time of great change and potential transformation. Follow your heart, not your fear! That is the message.  Your heart knows what is true.  Aquarius is about true freedom, freedom to be ourselves and live in love for all beings.

On a personal level Aquarius requires us to be true to ourselves and asks how much have we sacrificed on the altar of the approval of others. When we are in alignment with our deepest truth those we love may not understand our choices. It takes courage to free ourselves from the expectations of others. I, myself, have made choices about my life that my son will never understand. My choice to become an astrologer was one of them, my spiritual path another. I knew who I was and my life would be a fraud unless I pursued what was right and true for me. As we become more authentic, those whom we love may still not understand but will come to recognize the truth and authenticity with which we walk and may come to respect us.

The New Moon in Aquarius is in a tight square to Mars in Scorpio. Mars in Scorpio asks how passionately do we want the Aquarian vision for ourselves and our world? What are we willing to do to create it?  When we are aligned with the deepest part of ourselves we come alive, that is living a passionate life. When we are living passionately, our vision of the future becomes clearer and we will know what to do.

Uranus, the ruler of Aquarius, is in a sextile to the New Moon in Aquarius. Uranus is also trine Saturn and square Pluto so it is very powerful now. Uranus is asking us to transform our collective reality by expanding our consciousness and releasing self-limiting beliefs. All of our dreams, visions and beliefs create our reality collectively. Let us create a new reality based on love of each other and our mother, the Earth. Let us invest in a new belief called “Pronoia- the opposite of paranoia; the belief the Universe is conspiring in your favor.”

The Aquarian New Moon ushers in the Year of the Fire Monkey in Chinese Astrology. The Fire Monkey is erratic, irrepressible, ingenious, clever, unpredictable, resourceful, adventurous, selfish, magical, quixotic. In other words, keep your wits about you because anything, absolutely anything, can happen.

In these times of great change, we need let go of everything we think we know. We need to break with the past and the belief that just because something has not been done before that it can’t be done now. We have reached so many milestones that we thought would never happen, e.g.- legalization of same sex marriage and cannabis (in several states and more to come). When critical mass is reached, change happens quickly. We are supported by so many from all over the Universe in making this shift into living from our hearts. Let the shift to Love reach critical mass here on Mother Earth and together we will make that quantum leap into a new paradigm!