Be the Change! Capricorn Full Moon 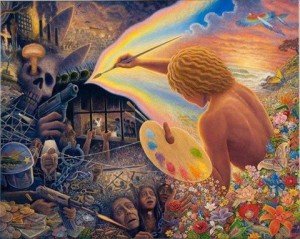 Hold onto your hats for this Full Moon in Capricorn! Full Moons often bring out the crazy in all of us. Our emotional bodies expand in response to the Moon when she is full; the terms lunatic and lunacy originally referred to these heightened emotional states around the Full Moon. As we know, the police and emergency rooms report much increased activity when the moon is full. As the Moon’s energy is growing but not yet full I am writing this article. I have just heard about the tragedy in Nice, France, the actions of a man known to be emotionally unstable with possible terrorist ties in the midst of this very strong and chaotic energy. The planet Uranus squares both the Sun in Cancer and the Full Moon in Capricorn creating volatility and excitement. The square aspect can be a catalyst to motivate actions and drive change. It is important to be aware of how we are feeling so we do not act on dangerous emotions as they will pass. Not only is the energy excitable it is also unpredictable. Anything can happen!

Capricorn is the sign of the archetypal Father with attributes of responsibility, integrity, character building and setting limits. Cancer is the sign of the archetypal Mother and family with attributes of unconditional love and nurturing. These two parental energies are often basic to the shaping of who we are and how we help to shape others. There needs to be a balance of both energies to become a mature and loving human being.

Uranus is tightly conjunct the dwarf planet, Eris also called Pluto’s twin, as it squares this Full Moon. These two bodies are traveling the same area of the cosmos for the next several months around 24 degrees of Aries, anyone with planets in the cardinal signs close to this degree may experience some dramatic changes in their lives.

Eris was the Goddess of Discord in Ancient Greece and the sister of Ares, the God of War. She brings with her anger, contentiousness, and discord. But through the expression of these emotions it can bring about the discomfort necessary to affect change. Capricorn likes order and structure, Cancer likes safety and comfort. Both of these signs would have great emotional discomfort with the energy of Uranus and Eris, who are both agents of change. When they are working together it may feel more like chaos. During these tumultuous times it is important to remember what Depak Chopra said, “All great change is preceded by chaos.”

Uranus is also called the Great Awakener. We are being challenged to wake up from the deep sleep of our addiction to comfort, a shadow of Cancer. Many of us are addicted to a lifestyle that is very destructive to Mother Earth and many of Her children. The Uranus/Eris conjunction is shaking us out of our complacency; there is much we have been able to turn a blind eye that is now directly in our view, demanding change. Movements such as Black Lives Matter, the political revolution of  Bernie Sanders and his supporters or the millions marching in the streets of Europe for economic justice are happening as the anger of the collective is rising due to the social, economic and environmental injustices of our world.  The people rising up against these injustices is how the change will come. As Dr. Cornel West says, “It’s time to go from having hope to being hope. It’s time to go from being spectators, to being actors.”

We all have a need to feel safe and yet that is also an addiction. “Playing it safe is a sedative” as a friend shared recently. This conjunction of Uranus/ Eris square this Full Moon is challenging us to take risks to follow what fills us with life and vitality. Holding on to what feels safe or is no longer serving us keeps us asleep and creates soul loss. As we take the risks that feed our soul we awaken our connection to our own inner Divinity and to the soul of the world. The Anima Mundi, or world soul, is where all beings are intrinsically connected. This is where we can create the deepest changes and affect the destiny of our world.

This Full Moon at 28 degrees of Capricorn is the degree of Pluto in the natal chart of the United States. The Uranus/Pluto square that has been going on for the last several years has lifted the veil of secrecy on the power structures in our country and the levels of corruption are being seen for what they truly are. We are being shown there is another way; that honesty, integrity and courage can create change and can be part of our political process.  We need to be brave enough to break from the herd, think for ourselves and stand up for what is right and true. There is a real political revolution happening here that is waking people up not only to the corruption in our country but to our own power. We have the power to create the changes we want to see but it is up to us to stand up and claim that power. It won’t be given freely. We must be the change we wish to see!

At this Full Moon there is a Grand Water Trine which involves Mars in Scorpio, Chiron in Pisces and the Sun in Cancer, all in late degrees. This pattern brings the gifts of courage to face our own darkness and then to forgive ourselves which allows for an opening of the heart. We need to have an open heart in these tumultuous times to be able to feel the suffering of others.  It is when we can fully feel compassion that real change occurs within ourselves and our world.

In the midst of all this change, anxiety can often develop. Anxiety is living in the future, worrying about what might happen. It is important to stay in the present moment as much as possible for that is where the Divine lives. In these tumultuous times having a strong connection to Divine guidance is necessary, making the Sabian Symbol for Capricorn 28 degrees very profound, “A Large Aviary.” Birds symbolize spiritual forces and are often messengers of Spirit. One of the meanings of this symbol is clairaudience.  The warning however’ is there may be many inner voices speaking. It is important to discern the voice that comes from the heart, not the head. For the voice of the heart is the true voice of Spirit showing us the way forward in these changing times. In the midst of chaos we are creating a new world.

“One must still have chaos in oneself to be able to give birth to a dancing star.” Friedrich Nietzsche