Behold There Is Magic All Around Us! Aquarius New Moon Solar Eclipse 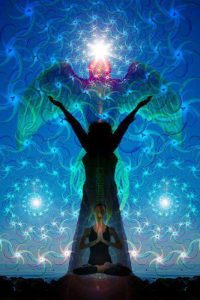 “Behold there is magic all around us”  is a pagan chant that perfectly captures the message of this partial New Moon Solar Eclipse at Aquarius 27 degrees.  Aquarius is the visionary, oracle and seer that sees the future and attempts to guide us in that direction. Aquarius brings revolutionary ideas from the Cosmos, pouring them like sacred waters from the heavens to earth. The problem is we are often set in our ways and have strong beliefs about the nature of reality. This Aquarius Solar Eclipse is about to take us into the quantum field and show us much different perceptions about reality.

During a Solar Eclipse, the light of the Sun is blocked for a short time and the electromagnetic field of the Earth is disrupted. When the flow of light from the Sun is interrupted, nothing is normal. It allows for old entrenched patterns to be released and Cosmic energy to flow in which affects our energetic field, allowing for change and awakening. With this Aquarian energy coming in be prepared to have moments where we can see beyond the veil with glimpses of the true nature of reality. Science is beginning to validate much of what our ancestors and indigenous people have always known that everything is energy and vibration and it is at that level that we create.

At this Solar Eclipse not only are the Sun and Moon in Aquarius but also Mercury, which symbolizes the human mind. Uranus, the ruling planet of Aquarius, is in an aspect that brings opportunity to this eclipse. Uranus is the Divine Mind that is the web or matrix of universal ideas or field of infinite possibilities. Quantum physics now shows us that it is in this field of consciousness that our thoughts and beliefs create our reality. As we align our human minds with the mind of God we can create instantaneously. I have become aware of how often I set an intention and it is fulfilled almost instantly. I have heard others say they are experiencing this as well.

This is a South Node Solar Eclipse which has to do with releasing what is old and outdated in our lives. The planet Jupiter, which is in Scorpio, is in a challenging aspect to this eclipse which indicates that what we need to release is old, outdated belief systems to which we are emotionally attached. We have the belief system that for change to occur it is a long and arduous process, which sometimes can be true. But what if we open to the possibility that the changes we are seeking can happen in an instant? I think we are being asked to hold the paradox of continuing to do the hard inner work of self-transformation and the possibility that awakening and manifestation can happen in a moment with ease and grace. We are being shown that as we align our hearts and minds with Creator, set our intentions and believe in ourselves, magic can happen. As Ralph Waldo Emerson says, “Once you make a decision, the Universe conspires to make it happen.”

Aquarius, being the visionary of the zodiac, can see the bigger picture and where we are headed. The world we have created and all the governmental, economic and social structures of that system are crumbling and as they do fear can arise. Many are crossing over in these times of chaos which also brings great sadness and grief. We are all feeling the fear and anxiety that comes with great systemic collapse and change. Eclipse seasons are always harbingers of change. The bigger picture of the Aquarian oracle is that in the chaos of destruction a new paradigm is being created. I recently heard a song that I knew had great truth about these changing times, “I come from the Light to remind you everything is right.”  I knew in a moment the truth of these words, that everything is right even though it does not feel that way. It is important to trust that we are moving toward the Light even in the midst of what seems like great darkness.

Saturn is in Capricorn, his own sign, for the next 3 years. One of the teachings of Saturn is perseverance and inner strength. I come from a spiritual tradition that teaches the importance of “holding your seat,” which means being firm as strong energies and contractions arise as fear is triggered. We are being blasted out of old ways of being into a new reality based on love, truth and authenticity of self so we are being shown any ways we still live in the old reality. We are moving into the Aquarian Love Revolution so any places where we hold fear are coming into consciousness to be released.

The asteroid Hygeia, the Greek Goddess of healing, is conjunct this South Node Solar Eclipse which brings in the concept of healing the past.  In the quantum field, where everything is energy, we can heal our own personal trauma as well as trauma in our ancestral lineage and the collective. As a First Nations quote says, “When we heal ourselves, we heal seven generations before us, seven generations after us and Mother Earth.” In the energy of this eclipse this door to the past and future swings wide open and magical healings can happen on a cellular level.

The asteroid Juno, the Greek Goddess of relationship, is also tightly conjunct this eclipse. She is in Aquarius, the sign of freedom and equality. In ancient times, prior to the patriarchal conquest of Greece, Juno (Hera) was the Queen of Heaven and Earth who was equated with the Milky Way. She provided sustenance to Her people and was the patron of women. I think it is appropriate with the reinvigoration of the women’s movement that Juno should be so prominent in this eclipse. She is showing us that a new paradigm of the relationship between women and men is on the rise, one of equality, freedom of choice and empowerment.

Aquarius is known as the sign of genius and in ancient times that aspect of genius in women was known as juno. Whatever we call it, our unique individual genius is being called out at this eclipse. To create a world that serves Mother Earth and all her children, we all need to access the unique gifts that we each have to give. Solar eclipses call upon us to share our light with the world for it is much needed to help us shift into higher dimensions and levels of consciousness.

Synchronicities abound in these magical times around eclipses. Author Arielle Sillsbury says about synchronicities, “Begin to pay attention to the underlying connections between apparently unrelated events, revealing themselves as the higher symbolic coding of your destiny-unrolling like a magic carpet.”  I tend to see synchronicities as bread crumbs left by the Universe to show us the way. Our job is to just pay attention and follow those crumbs to our destiny. Magic and miracles are happening every day, either great or small but they are here. The Light is piercing through the veil now very powerfully to show us the truth of our existence.  All we have to do is trust. As the poet and songwriter Bob Dylan sings, “The times they are a-changin!”  It is a powerful time to be alive as we move into the Love Revolution of the Aquarian Age!

“Behold there is magic all around us, awaken, rejoice and sing!”   Chant by Abi Spinner Mc Bride