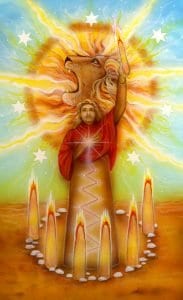 Calling all courageous, lion hearted people, the world needs you now! As we move more deeply into turbulent, chaotic times, new worlds are being formed. We must lead with our hearts to awaken from the dream and change the reality we are all creating together. The Full Moon Lunar Eclipse at 23 degrees of Leo is sending power surges of love into our energy field and it is important to let that love in.  As these power surges of love enter, they are breaking up old patterns of fear so we may actually feel more fear.  Find your center, take a deep breath, release any stories around the fear and let it go!

Eclipses occur when the light of the Sun is blocked by the Moon (New Moon Solar Eclipse) or when the shadow of the Earth blocks the light of the Sun reflected by the Moon (Full Moon Lunar Eclipse.) Everything is made of photons, the light of the Sun, so when the Sun blinks it allows a portal of celestial/cosmic energies to enter our physical and subtle bodies. This is galactic energy from beyond our solar system and is updating in some way our cosmic consciousness. When the actual eclipse has finished, the energy of the Sun that was blocked can create power surges of solar energy when it is released.  This is a Lunar Eclipse, so it greatly affects our emotional bodies and our relationships with others. Its effects start about a week before the eclipse and last about 6 months but any changes that are coming usually occur within ninety days after the eclipse. A comet that has been seen for the last 2 months will be at its closest to Earth the night of eclipse as well. Weather patterns are often impacted by eclipses as well. Lots of big energy happening!

Eclipses occur in 2 opposite signs called a polarity over a period of approximately 19 months and when an eclipse occurs both signs are impacted simultaneously. The last eclipse cycle has been in the Virgo/Pisces polarity which is about service, spirituality and humility. We are moving into the Leo/Aquarius polarity which is about creativity, self-empowerment, leadership and working cooperatively with others while remaining uniquely ourselves. We are in transition this month as we have an eclipse in both cycles, one in Leo and one in Pisces.

Leo, the Lion, is ruled by the Sun and is associated with the health of the heart, both physically and emotionally. When the energetic power surges occur it can affect our hearts/emotional bodies, either strengthening or weakening.  Our relationships may go through some turbulent times with this eclipse as it is like a triple strength Full Moon and our emotions are strong. This Lunar Eclipse is asking us to share our hearts with those we love without our usual defenses or projections. It is an opportunity to love ourselves and others, to accept all things unconditionally, forgiving and releasing all judgement. There can many growth experiences through interactions with others at this time.

Often a Lunar Eclipse allows some information that has been hidden to become known, for good or ill. When an eclipse, Lunar or Solar, impacts our energy it can have very profound, transformative effects depending on what planets it aspects or what area of life (House) it activates. For example, health, work, financial or relationship issues could arise if their energy is waning or weak, that area of our life may not be able to hold power surge and what was weak will now break down. On the other, hand if that aspect of life is strong and vibrant, it can give it a huge boost of energy and may set us in a new direction.

An example of the effects an eclipse can have on our lives is one from my own life. My Sun at 27 degrees of Aquarius was activated by a powerful eclipse in 1999; my whole life opened with a new astrology teacher and mentor, a new relationship and a new life direction. At the same time Bill Clinton, who was also receiving that same eclipse to his 27 degree Leo Sun, was in the midst of an impeachment process. My new cycle was emerging and got a power boost. Bill Clinton’s energy was waning and could not withstand the power surge he was receiving. It often depends on where we are in our lives as to how the eclipse will manifest, especially if it activates an important planet or angle in the natal chart. Potent eclipses to planets in our natal chart can be life transforming.

This Lunar Eclipse in Leo is in a very strong, passionate pattern called a Kite, which consists of a Grand Fire Trine with an opposition to one of the points.  A Grand Fire Trine (looks like a triangle) is full of passion, desire and inspiration but without direction it can implode or explode. The Kite, which has an opposition to a point in the trine, gives the combustible energy direction. In this Lunar Eclipse the Moon in Leo is trine Uranus in Aries and Saturn in Sagittarius. That is a lot of fire! The release point is the Sun in Aquarius.

What this pattern says to me is that we are being asked to walk in this world with our hearts open with authenticity and integrity to live in a way that makes us come alive. We may find new purpose and direction as these power surges and celestial energies enter our subtle and emotional bodies giving energetic boosts and breaking down old patterns.  The release point of the Kite, which actually looks like an arrow being shot, can be that direction we have been seeking. The release point, the Sun in Aquarius, asks us to be true to ourselves, think outside the box and believe in a new paradigm where love of each other is the guiding principle.

This is also a very creative time with the Lunar Eclipse in Leo in a Grand Fire Trine. The power surges coming in can feed our internal fire causing the longing to create our heart’s desire in whatever form that may be such as art, gardening, dance, writing, healing, love and beauty. Let your heart take wings and create!

There is also a second Kite figure with the same three planets in a Grand Fire Trine, the Moon, Uranus and Saturn. Uranus opposes Jupiter in Libra which also creates a T-Square with Pluto. This eclipse has several very complex patterns, almost like the Cosmos is multitasking. Jupiter in Libra is showing us the way to peace. It seems to be through our own individuation process by harnessing the power surges of love coming in. The square to Pluto is the continued breakdown of systems that no longer serve us and bringing to light what has been hidden from consciousness.

As the power surges of love from the Universe charge our world, open your heart! Lean into the energy! It is breaking up and releasing old patterns of fear while creating new paradigms.  We all need to be lion hearted, fearless in our love for ourselves and each other while being authentically ourselves. Rise up and become who each of us is destined to be. For once we become fearless, life becomes limitless.