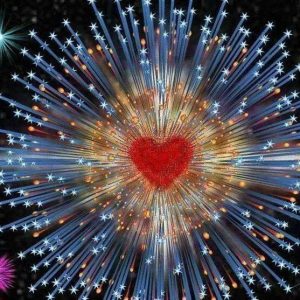 “Ubuntu” is a Nguni Bantu term meaning “humanity.” Per Wikipedia it is often translated as “humanity towards others” but it often used in a more philosophical sense to mean “the belief in a universal bond of sharing that connects all of humanity.” This New Moon Solar Eclipse at 8 degrees of Pisces and conjuncts Neptune opens a cosmic portal for this teaching to emerge with great force. Pisces helps us remember that energetically we are all one and everything is energy. What we do to each other we do to ourselves.

Everything is bathed in sunlight and ultimately made of photons which come from our Sun. In a Solar Eclipse the Sun blinks and its light is blocked for a few hours allowing powerful energy from the Cosmos to enter our atmosphere. The fundamental laws of our world no longer apply, it is an opportunity for leaps in evolution or for everything to fall apart. Early peoples dreaded eclipses because the energy is very different and much less manageable.

Through the lens of Pisces this Solar Eclipse is bringing compassion and a remembrance that we are part of something bigger than ourselves.  Pisces reminds us to align our will with Divine Will and to look inside, not outside for the answers we seek. The lens of heart-knowing and intuition are gifts of Pisces that connect us to the Universe, all that is, which is so much bigger than our small egos. It is a time of Unity Consciousness, a time of magic and miracles.

The shadow side of Pisces can be deceit, illusion and delusion. We see what we want to see and believe what we want to believe regardless of the facts. We must search beyond the surface to find the truth. Things are not always as they seem. This is a South Node eclipse so it is about releasing. There are aspects of our lives we must let go of to be able to move forward. For the collective, it seems we need to let go of the illusion of separation from Source and from each other.

This New Moon Solar Eclipse which is planting a seed that will grow over many months has another very powerful aspect. There is an exact conjunction of Mars and Uranus at 22 degrees of Aries. This is a huge mobilization of energy but hard to manage. It feels like a call to action; a time to show up and make a stand. Because Mars is in its own sign it is extra powerful. Mars is the warrior and brings up issues of courage and conflict. As anger and conflict come up so does need for setting good boundaries and saying, “No.” In many indigenous societies warriors are defenders of the those who cannot protect themselves, not aggressors in the way we think of warriors. Uranus always brings unexpected events and changes.

The Mars/Uranus conjunction in Aries is tightly opposite Jupiter in Libra which is about balance, justice and fairness. Our world is out of balance due to injustice on all levels, economic, social and environmental. People are rising up everywhere in anger over the injustices that are being done. We are being called to be strong warriors to defend and protect ourselves, each other and our land. People in town halls everywhere across the US are showing up and holding their representatives accountable. Many of these congressional representatives cannot stand the heat and have actually run out the back door. The people of Standing Rock are warriors for Mother Earth and have started a movement. There are now people all over the country who have been trained in non-violent resistance at Standing Rock who are defending our water at different pipeline sites. The people from Standing Rock have shown us the way, how to move forward in nonviolent protest and a state of prayer for this is sacred work we are doing right now.

Much anger and fear is arising from the collective unconscious. It has been triggered and it must leave this earth plane but to do so it must pass through our consciousness. There has been so much injustice in our world for so long, the anger and fear is really at a boiling point. It is important to respond to the anger and fear which is rising with love and positive energy to help neutralize it as it passes through us. What this can mean is to pause and take a deep breath before reacting. Try to give a thoughtful response when someone is being negative and don’t take things personally. It takes courage and awareness to do this but we must meet fear with love.

I saw a video of the comedian, Conan O’Brien, doing a comedy skit on the streets of Mexico City. He was asking for donations for building Trump’s Wall. There were many and varied responses from the people, most of them humorous but one really impacted me. It was that of an elderly Mexican woman. She said she was putting love in Conan’s collection box because that is what is most needed now.

So much of the anger and fear that is rising is based on a poverty consciousness and a fear of lack. Many are afraid there is not enough to go around and so grasping for more than their fair share has become their response. The concept of Ubuntu calls upon us to remember there is a universal bond of sharing that connects all of humanity. When most of us were young one of the fundamental teachings in every home was that of learning to share. We seem to have forgotten that spiritual teaching but it is more vital now than ever. There will be enough to go around when we share. This New Moon Solar Eclipse in Pisces reminds us not only to share but that we are all part of the same energetic web of life. What we do to each other we do to ourselves.

“Humankind has not woven the web of life. We are but one thread within it. Whatever we do to the web, we do to ourselves. All things are bound together. All things connect.” Chief Seattle