What Would Kali Do? Aries New Moon 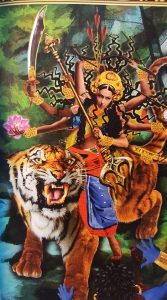 Aries is the first of the fire signs and at this New Moon there are 5 planets in Aries. We are being asked to walk through the fires of transformation at this time. Aries is the warrior who asks for courage which does not mean there is no fear; it means to be afraid but do what needs to be done anyway. The word courage comes from the French word “coeur” meaning the heart. As we shift into a new love centered paradigm we must lead with our hearts and trust its wisdom which takes great courage.

The New Moon at Aries 8 degrees is conjunct Venus retrograde. The planet Venus is named after the Great Goddess of Heaven and Earth and one of the primary symbols of the Divine Feminine. During Her retrograde cycle it is believed that She is making the journey into the Underworld for necessary healing and rejuvenation. In Aries, She is the Amazon warrior asking if we have the courage to face our fears to become self-empowered. What would it take for you to become empowered? What fears must you face to live passionately and authentically in this world as yourself?  When Venus is retrograde it is a time of reflection. When She goes direct on April 15th we enter a time of action.  She will then be a Morning Star which is Her warrior aspect in many traditions and will be seen in the early morning eastern sky until Jan 2018.

During this time of Venus retrograde in Aries, I had powerful journey where Durga, an aspect of Kali, came to me. Durga is a warrior Goddess of the Hindu tradition who rides a tiger. She is an embodiment of Shakti, the primordial cosmic energy that moves the Universe. Durga represents the strength of will, fierceness, power and energy that is required to overcome. She is called “The Invincible One.”

Her message to me was one not only of self-empowerment but of walking in the world with Her power and strength. I was shown that She is the fierce face of the Divine Feminine that is rising. Women, and the men who support them, are rising up everywhere with marches, rallies and strikes for the empowerment women all over the world. I just read that many women, in response to the election of a very misogynist administration, are running for political office on local and state levels. Durga is standing with us for social, economic and environmental justice in movements such as Standing Rock and Black Lives Matter where many women are in leadership positions. The feminine must be empowered for the world to come back into balance. With Kali Durga at our side we are invincible.

Mars, the warrior archetype and the ruler of Aries, is conjunct the dwarf planet Ceres and both are in the sign of Taurus at this New Moon. Taurus is the most grounded, earthy sign of all the zodiac. Ceres, in Greco-Roman mythology, is an aspect of Mother Earth. This is another indicator that we are being called to stand up for Mother Earth and protect Her.  In many indigenous traditions the warrior is a protector not an aggressor. Taurus teaches us to be nonviolent, calm, centered and non-reactive in our response to the many challenges facing us. As Thich Nhat Hanh says, “Sometimes we underestimate someone sitting very calm, very solid and not reacting, they can touch a place of peace, a place of love, a place of nondiscrimination.”  Aries wants action, Mars in Taurus is showing us how to proceed with non-violence to help achieve our goals. For if we meet anger with anger, all we have is more anger.

The Sabian Symbol for this New Moon in Aries is “A Woman’s Hat With Streamers Is Blown By The East Wind.” It seems the winds of change are blowing at this New Moon. This may imply messages or forces coming out of the blue. The winds are coming from the East. The East in many traditions means new beginnings, the place of the rising Sun, the visionary aspect of the Eagle and the element of Air. From our Western perspective, the “East” is often associated with Oriental thought and spiritual philosophies.

The planets Uranus and Mercury are also conjunct in Aries but in later degrees. Mercury represents the human mind whereas Uranus represents the Divine Mind. When these two are working together, ideas do  come out of the blue. It is an aspect of connecting to the Matrix of all that is and channeling that information.

We are shifting out of the old paradigm into a new one and all of the information we need to create a new world is being channeled in right now if we can only catch it. Kali Durga, being an aspect of Shakti, is power awakened. She is the creative power of the feminine. We are in a time of great creativity which often comes in response to crisis. When we are comfortable there is little desire to create something new.

As the old paradigm is breaking down we must remember it will not give up without a fight. And that fight is here. We are in a battle for the soul of our species and the world we want to create. As inspiration for that battle, I recently saw a bumper sticker that said, “What would Kali do?”  Kali Durga is actually pure love but it can be tough love and that is what is being requested of us now in these times of great change. We are being asked to reclaim our fierceness and courage to follow what we know in our hearts to be true, in personal lives and in the world. That is what Kali Durga would do.