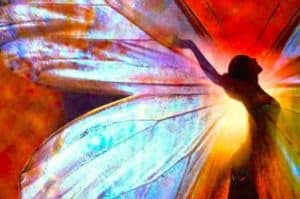 Put on your seat belts, the New Moon on April 15-16 will be a wild and crazy ride. This New Moon at Aries 27 degrees is tightly conjunct Uranus, the Trickster and planet of sudden change.  Aries is the archetype of the warrior who is decisive and takes action. Aries and its ruling planet Mars, teach us courage by walking through the fires of our fears. This is a pioneering, adventurous and risk-taking energy. A good Aries quote is “Fools rush in where wise men fear to tread,”  for without Aries’ sometimes fool hearty actions we would be stuck in the same old patterns that are based in fear and security needs.  Aries says take a risk, go for it! Jump!

Uranus is called the Divine Mind and can bring new and exciting revelations about the nature of reality and Cosmic truth. When we add Uranus to the mix, the planet that has the most to do with awakening, freedom, breakthrough and unpredictability, the energy of this New Moon becomes an unstable brew. It can be a very volatile mix that allows for impulsive actions as well as incredible creative breakthroughs. It is a wild card. Be prepared for surprises!

The good news and bad news is that there are several planets in Capricorn which are in a challenging aspect to this New Moon. Capricorn is a restraining influence that asks us to slow down and think things through before acting.  Capricorn is the sign of the Elder which demands maturity, wisdom and integrity in our actions. Saturn, the ruler of Capricorn, is in its own sign for the next several years so we are all being asked to grow up and be accountable. Saturn is also called the Lord of Karma and can be a hard taskmaster as we are shown where we might be out of integrity with our own inner truth. There may be consequences for past actions, mistakes or poor judgement but the goal is to lead us back into alignment with our truth not to punish us.

Mercury in Aries has been retrograde for three weeks but turns direct at Aries 4 degrees on this New Moon so things should start moving forward again. The whole month of April there is a challenging square between Saturn and Mercury. Mercury is the God of the Mind and rules all communication. The teaching here is impeccability of thoughts, words and actions; we are being held accountable for our words so choose them carefully. Mercury is also known for multi-tasking while Saturn wants focus. As we focus, our thoughts become more precise and our direction clearer.  As we clarify our direction, we may need to take some things off our plates and choose where and how to focus our energy.

Pluto in Capricorn is conjunct Mars and square this New Moon. Pluto brings power, depth and intensity to everything he touches. He is the God of the Underworld as well as death and rebirth. Combined with Mars, the God of action and war, this Pluto/Mars conjunction is a very volatile and powerful energy. At its most beneficial, these planets together can bring a powerful will to accomplish one’s goals combined with extreme courage. In its shadow, it can be an intense clash of wills and an extreme readiness to fight. It all depends on how conscious and aware we are as to how this energy will manifest in our lives.

The Capricorn planets ruled by Saturn are telling us to clarify, with a specific goal, what we want to create in our lives. Write down that intention with a date as Saturn is also known as Kronos, the God of time. Saturn is helping to organize the wild Cosmic energy of this New Moon in a way that helps us manifest in our lives. Just remember to leave a place for Uranus in his role as Trickster. We are well advised to leave room for the Mystery as specific plans will change as our way unfolds with unexpected twists and turns.  Uranus also brings synchronicities, the Universe dropping bread crumbs to help guide us to align with the Divine Plan. Uranus as Trickster helps us laugh at ourselves when we are taking ourselves and our plans too seriously.  As the old saying goes, “If you want to make the Gods laugh, tell them your plans.”

Aries is the beginning of the astrological calendar, so the New Moon in Aries sets the intention not only for the next thirty days but for the year. This New Moon brings with it a time of metamorphosis where the old constructs of our reality that have become stagnant and outdated die. The world seems to be in chaos and it is in that very chaos that a new world can be born.  What do you do you want to give birth to in the coming astrological year? What seeds are you planting? There are powerful dynamics at play to create something new and fresh in our lives and our world, but it will take courage and risk. Uranus, being the Cosmic Mind, can bring in downloads of new ideas, insights and innovations that we may not have known before. Open to the new paths that may be shown! We are in the midst of big change and just like the caterpillar, the old is dying so the new can be born!

“What the caterpillar calls the end of the world, the Master calls a butterfly.” Richard Bach