We Have A Beautiful Mother! Taurus New Moon 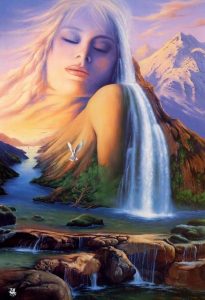 On Mother’s Day as I write this article, I am brought to tears by the beauty of our Mother Earth. In Alice Walker’s beautiful poem, “We Have A Beautiful Mother” we are reminded of the Earth’s exquisite beauty. The New Moon at 25 degrees of Taurus invites us to spend in nature and revel in Her beauty. It is not a luxury, it is a way to revitalize ourselves and a necessary way to feed our souls.

The Sabian Symbol for this New Moon is “A Vast Park” which implies being out in nature for pure enjoyment and pleasure. So, go to the park, roll in the grass, lie in the sunshine, breathe in the fresh air and the fragrance of flowers! There is nothing more important right now, not only to experience the beauty of the Earth but also to deepen our connection with Her.

Shortly after the New Moon, the planet Uranus moves into the sign of Taurus where he will be for the next seven years (except for a few months when he retrogrades back into Aries.)  Uranus is considered the archetype of the Titan god, Prometheus. Prometheus is the God of Foresight and Enlightenment. He stole fire from the Gods so humans would no longer be in darkness and He paid a heavy price for doing so. Taurus is the sign most closely associated with Mother Earth and our bodies, Her gift to us. Uranus’s transit through Taurus has to do with massive amounts of cosmic energy activating the Earth and our bodies. This transit is not about transcending our bodies but awakening through them.

Uranus rules the nervous and energy systems in the body so the awakening is through the activation of those systems. If this rising energy comes up against any blockages, we may have physical difficulties until the energy flows freely again. Our bodies will be one of our primary guides during this seven year period so pay attention to its teachings. There is a psycho-spiritual component to every blockage as well as a physical one. Taurus also has much to do with sensuality, so our pleasure centers will be activated as well. “Enjoy your body is the message.” The kundalini may rise and open fully to cosmic consciousness during this seven year event.

As Uranus activates the Earth with cosmic energy Her consciousness opens in profound ways. A dream teacher of mine named Robert Moss says we live in a “Speaking World.” Not only is our world alive and breathing, She speaks to us through all of nature. Astrologer, Caroline Casey says in her own unique way, “The New Moon on May 15th, as Uranus, Nature’s evolutionary Trickster Genius enters Taurus, the Realm of Animism (everything alive, everything holds a story, everything available for cahooting partnership)  is an opportune time to ask the myriad beings we encounter for their story; then listen …dogs, clouds, rocks, animals. Offer the democratic animistic wheel and deal: “If you tell me your story – then I will tell it for you to the humans, that our species may come into respectful accord.”

Uranus is known for bringing synchronicities or meaningful coincidences. I call them the breadcrumbs that Universe drops along the way to guide us. In a class I am taking with Caroline Casey she says when we admit we do not know something and pose the question “I wonder…?” the Universe responds with synchronicities to help answer the question. As I walked in the park, I posed the question “I wonder what the transit of Uranus in Taurus means?” Within a few minutes I found myself humming the melody from the chant “Praises for the World” and singing the poem from Alice Walker. I felt like I then had the answer I was seeking. I have since done this many times and found that answers start pouring in.

Uranus always brings change so in while in Taurus for the next seven years we can expect increased Earth changes. With increased changes in weather patterns we may see more disruption in food production requiring adaptation to the new patterns. As many millennials are facing job shortages in the cities, many are moving back to farms with local food production increasing. Taurus also rules banking and finance so expect change there as well with fluctuations in markets. It is an ideal time for new, innovative economic paradigms to emerge and flourish.

Uranus is also in a square to Mars at this New Moon and has been since the beginning of May. Mars also changes signs on the day of the New Moon, moving into Aquarius, where he will be for most of the next 6 months due to retrograde motion. Mars is a planet of action and combined with Uranus, a catalyst for change and potential great volatility. We know the Earth changes are here as evidenced by climate change, volcanoes, earthquakes and numerous other events and they will continue with increasing numbers. Mars in Aquarius is the call for revolutionary action in all matters of Mother Earth. We may be called upon in the next six months to protect Mother Earth and to stand up for what we believe to be true. This aspect also bodes well for progressive movements of all kinds. It is the dawn of a new world but it will take courage to bring it through.

At this New Moon and for the next six months, there is a beautiful trine from Jupiter in Scorpio to Neptune in Pisces which symbolizes faith and trust that we are being held in the hands of Creator in these challenging but energizing times. As we go through the “eye of the needle” in the shift toward the higher consciousness of cosmic love, Jupiter and Neptune may bring some endings. What is ending in our lives is what is either no longer working or we no longer need. We may find that we are more emotional and are grieving old losses because there is a clearing and healing of our energy field happening.  It is in the chaos of breakdown that new paradigms are born. Remember, all is as it should be for even in the chaos the Light is coming in strong and revealing things for what they really are.

The evolutionary goal of Taurus is to find our place of inner calm, to be the tree that stands firm in the midst of the swirling storm. The winds of change are certainly upon us but as we allow ourselves to connect deeply to our Mother Earth we will remain centered. She knows these changes are coming and one of those changes is our remembrance of how connected we are to Her. Take time to sit on Her, feel Her and remember She is our Mother whom we love and honor. She loves Her children and will help us hold steady in these times of great change. We have a beautiful Mother!

“We have a beautiful Mother, Her hills are buffaloes, Her buffaloes hills.

We have a beautiful Mother, Her oceans are wombs, Her wombs oceans.

We have a beautiful Mother, Her teeth, the white stones at the edge of the water, the summer grasses, Her plentiful hair.

We have a beautiful Mother, Her green lap immense, Her brown embrace eternal, Her blue body, everything we know.”