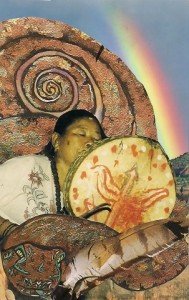 The planet, Venus, named for the Goddess of love, beauty and creativity, goes retrograde on July 25th. As the name of the Goddess implies, she is alluring, seductive and also very powerful in her ability to transform lives. In many cultures, such as the Maya and Sumerians, she was also a goddess of war. They say the planet Venus has the most turbulent atmosphere of any of the planets which also partly responsible for her brightness. In Sumeria, the planet Venus was the Goddess Inanna, Queen of Heaven and Earth, who makes her descent to the Underworld for forty days and forty nights. Correspondingly, she disappears from the night sky as the evening star and is reborn as the morning star. Venus goes through this cycle every eighteen months when she is retrograde for about six weeks.

This year as Venus goes retrograde she is conjunct the star Regulus, the heart of Leo, the Lion. Regulus is a star of royalty and leadership. It is one of the Royal Stars of Persia and is known to bestow great powers. From our perspective from Earth, the star has actually just moved into Virgo after it has been in Leo for many thousands of years until now. This changes the message and brings into play the power of the common person, not just royalty. In Virgo we are being called to step into service and make the world a better place. Venus is one of only two feminine planetary energies in our solar system, and starting her retrograde cycle precisely on this degree  sends a powerful message of feminine leadership in service to our world.

On Dec 21, 2012 a group gathered at the land of one of the International Council of Thirteen Indigenous Grandmothers, Grandmother Flor de Mayo  in New Mexico. In a powerful ceremony, several Mayan male elders came with a prophecy that now was the time to transfer the staff of power they had held for several thousand years, to the feminine. It is now the time for the feminine to lead the way, with the males to form a circle of protection around the women. They made the request at that time to share that ceremony, so to help spread the empowerment of women and the message of feminine leadership around the world. Now is the time for women to stand and claim their power, taking the reins of leadership that is so badly needed.

As Venus turns retrograde, she is in a square to Saturn in Scorpio, which represents obstacles and challenges. The obstacle here is societal patriarchal conditioning that tell us that feminine traits are not important. However, compassion, imagination, creativity, intuition and expressing our sensitive, feeling nature is exactly what is needed to bring our world back into balance. Feminine energy is round and flowing, so meeting in circles, like councils, where everyone can be seen, heard and participate is important. Respecting the power and sensuality of the body are feminine traits as well. Feminine leadership is leading with the wisdom of the heart, and that is its true power. Our heart is in direct connection to Source and our Divine guidance. Much strength is being called for in these changing times. “Strength is internalized power, the realization and acceptance that you have what it takes to act as needed. Strength is a feminine quality for it is more a state of being than an action.” – Charlene DeLong.

We all have masculine and feminine energies within us. By strongly activating the feminine, it is bringing balance into an overly masculine dominated world. But, it is also a clarion call to women for courage to boldly take their place in leadership roles, bringing the wisdom of the feminine, a combination of intellect, intuition, and instinct.

On a more general note, whenever Venus goes retrograde it is a time to re-evaluate what has value for us in relation to our self-worth and self-love. Venus asks us to reassess our emotionally intimate partnerships and friendships. Do they reflect our current level of self-love and self-worth? It is often time to renegotiate relationships to reflect who we have become. This is a process of realigning with our hearts and what has value and meaning for us now. It is a time of processing but not necessarily acting. Venus retrograde often brings people from our past, this lifetime or others, with whom we have unfinished business.

The empowerment of the feminine can help to create the kind of world we want to live in as it becomes more in balance. Women who believe in themselves, and each other, can change the world. As each woman realizes her power, she transforms the world.