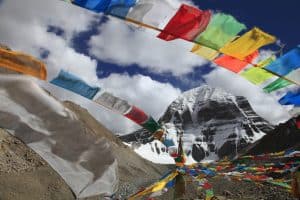 The Sabian Symbol for this New Moon at Capricorn 27 degrees is, “A Mountain Pilgrimage.” Many spiritual traditions have their most sacred sites at the top of mountains as there is a sense of being closer to the Divine at these higher realms. The mountain top is also a metaphor for our Higher Selves, the pilgrimage being a journey to higher levels of consciousness within our own being. Climbing a mountain can be scary, risky and potentially treacherous; there are many dangers along the way.  We are being shown the way by the teaching of the Capricorn mountain goat who makes its home in high and dangerous places. The message is to go slowly, remain focused, align with our personal authority and belief in ourselves to reach the top safely.

At this New Moon there are six planets in Capricorn, the Sun, Moon, Mercury, Venus, Saturn and Pluto. Saturn, the ruler of Capricorn, moved into this sign on Dec 19, 2017, tightly conjunct the Sun on Winter Solstice. Over the next three years the whole planet is having a Saturn transit as he moves through his own sign. Saturn transits are often indicate having a mountain to climb; it is very difficult but the rewards are great. Saturn is called the Lord of Karma and our karma, for good or ill, is coming due. Saturn teaches that all actions have consequences for example, our treatment of Mother Earth.

Saturn in Capricorn, as well as all other planets placed there, will show us where we are out of alignment with our own integrity and inner truth and also how to come back into alignment. Rick Tarnas, astrologer and professor at  California Institute of Integral Studies, says that we are moving into the “eye of the needle” in our journey toward planetary higher consciousness. The “Shift” is coming and we must be in perfect alignment to pass through the gateway or “eye,” so we are all being called upon to do deep personal work. Saturn in Capricorn is asking for accountability, maturity, inner strength, hard work and self-discipline. It is the energy of the elder and acts just like a strict grandparent who is practicing tough love so we can all be the best we can possibly be. So if we are called out individually or collectively on our behavior, we must pay attention and own it if it is true. It will make each of us a better person.  It is the only way to live in personal integrity and authority.

Mars in Scorpio is sextile and fueling the New Moon with opportunities for inner growth. He is also conjunct Jupiter who will be in Scorpio for the next year. At this New Moon we are bidden to look within at our own shadow material. For in that material we will find the unconscious motivations for our actions, those that take us out of alignment with inner truth and integrity. If we have the courage to be honest with ourselves we can reclaim our personal authority. “Integrity is telling myself the truth, honesty is telling the truth to other people.” (Spencer Johnson)

With Saturn’s movement into Capricorn for the next three years and beyond, the outer planets will be predominantly in feminine signs. The feminine signs are Yin, inner focused and still as opposed to the Yang signs which are masculine, outer focused and moving. We are moving too fast and have gotten ahead of ourselves. This is a clear message from the Universe to go within and find that still point. We may be called to be out in nature (not on the phone), have a daily meditation practice, do art or whatever helps us connect to our innermost self. For it is in that still point where we are most connected to the Divine within, our Higher Selves. It is in that space where we can remember who we are and why we are here. It allows us to trust as we remember and receive necessary guidance for the times ahead. Finding the still point within helps us to ground and center in the chaos that is the outer world.

The planet Uranus, which is a catalyst for change and brings revolution, is in Aries in a challenging square to this New Moon. All of the planets in Capricorn indicate the current patriarchal, capitalist paradigm in which we are living. Uranus is the wrecking ball to that patriarchal system, symbolizing the revolution in consciousness that is under way. Uranus is conjunct Athena and Eris, two strong symbols of the feminine warrior, showing us that women are coming into their power collectively to lead the revolution.

The old systems are breaking down. As we disconnect from the old fear based paradigm and usher in the new, it can bring up issues of fear and insecurity. Uranus is showing us another way, one that requires each of us to be true to ourselves. This is why we are receiving the teachings of Capricorn so powerfully right now about personal authority. We have been giving away our authority for too long!

The ancient symbol of Capricorn is the Sea Goat which is half goat and half fish, symbolizing creating form out of the formless. Capricorn and Saturn are teaching us that with focus, hard work, accountability and living in our own integrity, we can claim our own personal authority and create a new world. By each us of doing our own personal and spiritual work is our mountain to climb and ascent in consciousness. Collectively, this creates the planetary shift in consciousness on Mother Earth that we know must come.

“To thine own self be true, and it must follow, as night the day, thou canst not be false to any man.” William Shakespeare from Hamlet