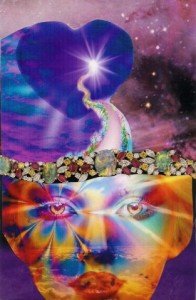 The New Moon at 5 degrees of Gemini, the archetype of the teacher, writer and storyteller, will arrive on May 25th.  What do all of these archetypes have in common? The use of words! I was recently reminded by one of my spiritual teachers that we are moving into the fifth dimension where our words create almost immediately so it is so important to choose words carefully. Remember the words from the Bible, “In the beginning was the Word, and the Word was with God, and the Word was God….And the Word was made flesh.” (John 1:1) Words are sound, which is frequency and vibration which creates matter and life.

The realization of the importance of words came to me after I visited my son and his family. After my visit I said that I had “concerns,” which could easily be substituted with the word, “fears.” I realized that I was speaking from my own fears and was projecting them onto my son and his wife; this was my stuff and not theirs. My son and his wife are actually doing a wonderful job of parenting. I realized (with some help) that I was creating what I most feared with the focus of my energy and the language I was using. When I was reminded that we are moving into the fifth dimension and creating with our words very quickly, I had to ask myself what it is that I want to create. I realized that I wanted to create a relationship of love and trust with my son. When I became aware of what my intention really was, I was then able to change my perspective and release my “concerns.” I wrote to my son and daughter-in-law about how much I loved them and what a wonderful job of parenting they were doing; all new parents need love, support and encouragement.  I feel like I am rebuilding my relationship with my son and his family when I speak from the heart.

This New Moon is conjunct the dwarf planet Ceres, an aspect of Mother Earth, while Mercury which represents the Mind, is in Taurus, the astrological sign most closely aligned with Mother Earth. It appears that Mother Earth has some messages for us now. Both Ceres and Mercury aspect Neptune, also known as the Divine Heart. One of the most important teachings now is that we must align our minds with hearts, that the heart actually gives direction to the mind. As we speak from the heart, the sound and vibration of our words align us with the energetic field of Mother Earth and helps to bring back into balance with Her. Remember  saying from Vedanta is, “The mind is a great servant but a poor master.”

The shadow side of this New Moon in Gemini is being too busy!! It is hard to hear what our hearts want to say if we don’t take the time to listen. Mercury in Taurus  sextile Neptune in Pisces is telling us to do just that, slow down and listen. Take time to contemplate, meditate or take a walk without the phone for that is often when the most creative and authentic ideas come in. I have read that, “Creativity happens when your mind is unfocused, daydreaming or idle… The idea is to balance linear thinking—which requires intense focus—with creative thinking, which is borne out of idleness. Switching between the two modes seems to be the optimal way to do good, inventive work…Albert Einstein famously turned to music—Mozart in particular—when he was grappling with complex problems and needed inspiration.” Emma Seppälä Science Director, Stanford University’s Center for Compassion and Altruism Research and Education

The Nodes of the Moon have changed astrological signs, they are now in the Leo/Aquarius axis for the next eighteen months. The South Node is often about what we need to release and when in Aquarius, we are asked to step out the collective consciousness or “herd” mentality to pursue our own creative genius, the North Node (way forward) in Leo. Creative solutions to our current problems is what is called for now and as we do we can raise the vibration of the collective.

Another very powerful pattern that is active at this New Moon is called a Kite, consisting of a Grand Fire Trine and an opposition. The points in the Grand Fire Trine are Uranus (Awakening, Divine Mind) in Aries, Saturn (Structure,Tradition) in Sagittarius and the North Node (Way Forward) in Leo. This can indicate the meeting of the traditional past and the creative spirit pointing to the future. Saturn in Sagittarius (Beliefs) also opposes Mars in Gemini which is out of bounds. When a planet is said to be “Out of Bounds,” it is higher in the sky than the Sun and acts like a wild card, it breaks all the rules. It can create chaos and volatility but is also very creative. Mars will be out of bounds from May 14-June 29th in the mid degrees of Gemini to the mid degrees of Cancer. Mars is the warrior and in its shadow side in Gemini can wound with words and when in Cancer, Mars can be very defensive and hypersensitive.

Mars in Gemini at this New Moon calls for us to have courage to speak the truth which comes from our hearts and to confront our own self-limiting beliefs and that of our culture. I have heard that a belief is only a thought that has been thought many times until it becomes a belief. We are facing “Saturnian” reality which could also be called “consensus reality” or the beliefs that we have agreed upon to be true.  Mars out of bounds can create chaos and volatility but it also helps us to break out and surpass outmoded structures and limitations that we have created through our beliefs.

The Sabian Symbol for this New Moon is, “A Revolutionary Magazine Asking For Action: The explosive tendency of repressed feelings and root emotions.” Dane Rudhyar, astrologer and mystic, also said this about the symbol, “Whether the revolutionary action is violent or peaceful, bitterly resentful or loving, the one desire is to reach beyond established forms.” We are in revolutionary times as we are recognizing in greater numbers the lies we have accepted as true about our government, our religions, our financial institutions and in general how we treat each other.  As we realize this, there are deep emotions rising to the surface and it may feel like the world is in chaos. Remember it is during chaos and the dissolution of existing structures that new worlds are created. The most revolutionary truth really is that the Universe is made of love, cooperation and collaboration are the laws of nature and that we are creating our world in every moment through our intentions, thoughts and words which then become actions.  As we move into the fifth dimension, remember the power of words! This anagram is a great way to remember to think before we speak and to let our words come from our hearts.

THINK- Is it True?  Is it Helpful?  Is it Inspiring? Is it Necessary? Is it Kind?