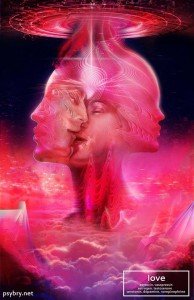 We are in times of great change; everyone can feel it. The Uranus/ Pluto square that has been going on for the last several years is finally moving on. It has done its work, shaking us out of our complacency. Many people are beginning to wake up the to the power we have both personally and collectively. We are awakening to the understanding that love is the only way and those who are aware will soon be at critical mass. It is hard work to get to critical mass but when it happens, things change very quickly. The Shift is happening!

The shadow of the Collective Unconscious is rising to the Light but has to pass through us to be transmuted. This lunar eclipse will help this process along. Lunar eclipses activate deep emotions that live in the personal as well as the collective unconscious, bringing into awareness things that have previously been out of sight, revealing what has been in the dark. The emotions and the intuition eclipse the rational mind right now, so listen to your heart carefully. Personal relationships become front and center. There could be greater eruptions of emotions in the next several months, both personally and collectively. It is important to let these emotions pass through, not hold onto to them. Walk, be out in nature, garden, generally any kind of movement helps the energy itself shift.

The Full Moon Lunar Eclipse at Libra 4 degrees on March 23rd is part of the energy we are feeling. It is a partial eclipse and will be seen in East Asia, Australia and most of North America. It is on the Super Galactic Center which is said to be where the “Mind of God” resides and opening a channel to that very powerful point in the galaxy.

The Sabian Symbol for Libra 4 degree is, “A group of young people sit in spiritual communion around a campfire.” This symbol speaks to how important it is to work together and be guided by Spirit. In these changing times, ceremonies that help us connect to the Divine are crucial.  We are not alone, there is help. We just need to seek it out. The image implies people sitting in a circle, a sacred geometric pattern signifying unity, wholeness and infinity. Everything contained within the circle is protected making the spiritual work more powerful. Also, in the circle everyone is equally heard and seen. This symbol also speaks of the importance of our young people, that they be brought into ceremony as they are our hope and our future. Many young people are leading the way in this shift in consciousness, it is important for them to have a strong spiritual connection to remain on the right path.

The Moon in Libra represents our heart in this eclipse, reminding us of the need for emotional bonding and connection. To come through these difficult times, we cannot do it alone. The Hopi prophecy says the time of the lone wolf is over. We need to learn how to live and work peacefully with each other. To do that we need to have compassion which is a deep love for one another. To bring compassion alive we need to develop empathy.  The definition of empathy is “the feeling that you understand and share another person’s experiences and emotions.” Brene Brown articulates the meaning of empathy so well when she says, “Empathy touches a place in me that knows where you have been. It engenders a feeling that we are not alone.” Listening is the core of empathy; sometimes all it takes to resolve a problem is to be fully present with another and just listen.

Libra brings into focus all of the ways we are out of balance, in the world and in our hearts.  We are seeing the world erupt right now around all of the injustice and inequities in our world. The emotion behind those injustices are coming to light and wanting action to rectify them. Our world has become so polarized and angry that we have forgotten that most of us are suffering on some level. We tend to believe it is only us or our group that suffers. When we can empathize with another, feel their pain and listen, it will go a long way to diffusing the anger and polarization.

The Sun and Mercury in Aries oppose this eclipse as a Full Moon is always an integration of opposing energies. Aries asks for courage to face our fears.  It often brings up confrontation with the goal of learning conflict resolution skills.  Setting good boundaries by clearly defining what is ok and what is not is one of these skills.  Being a loving, compassionate person does not mean allowing abuse, especially from loved ones. Having good boundaries is form of self-love requiring respect from others.  Mercury in Aries asks us to have the courage to speak up and say what needs to be said even if it is scary. We are called to speak truth to power and in the process become self-empowered.

Mars, ruler of the Aries, is in Sagittarius and trine the Sun. Mars will go retrograde in Sagittarius next month so we will be receiving a very long teaching of this energy.  Mars is the archetype of the Warrior and in Sagittarius he is asking us to stand up and fight for what we believe in and our vision of the future. We may be tested in our courage to walk our talk because action is what is needed.

Those who have the power will not give up easily so we cannot let ourselves get discouraged. For example, 30,000 people showed up a rally for Bernie Sanders in Seattle on March 20th.  None of the mainstream media covered it in their attempt to manufacture consent for his rival. Remember, the revolution will not be televised but that does not mean it is not happening. We need to continue to have faith in our vision of a more loving and just world where everyone’s voice is heard. As I said earlier, we are beginning to reach critical mass but are not yet there. As the old cliché goes, “It is always darkest before the dawn.” Don’t give up!

The lunar eclipse is in Libra, the sign of peace. We are being asked to walk the way of the peaceful warrior with non-violence and diplomacy. I had a dream awhile back of the “storming of the Bastille,” a very strong symbol of revolution but in the dream it was done without violence. It is important to stay centered and non-reactive in the midst of this chaos. I just saw a meme that said, “Don’t get upset with people or situations, both are powerless without your reaction.” It is crucial to remember this so we don’t get thrown off of our center.

The fear and hate we have carried in the collective unconscious for so long is on its way out, let it go and don’t get caught in its web. As an example, I had an online conversation with a young woman expressing her “hate” for a political candidate. I wrote to her about the importance of not bringing the energy of hate into expression if we want to shift our world into a more loving and just world. She understood and was able to then express her concerns in a more constructive manner that was actually helpful to the conversation.

We must shine our light stronger into the darkness, into every corner and crevice where fear and hate still hide. We are being asked to have courage and work together to create a new paradigm of life here on Mother Earth. As the great spiritual texts say, “Love One Another,” love is the only way. The Shift is happening!

“Never doubt that a small group of thoughtful, committed citizens can change the world; indeed, it’s the only thing that ever has.”  Margaret Mead