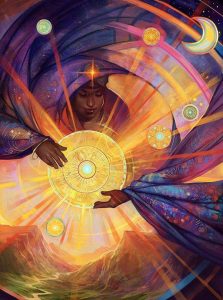 Love is a Cosmic Force and it is coming in strong at the New Moon Total Solar Eclipse at 29 degrees of Leo on August 21st. During the Solar Eclipse, the light of the Sun is blocked for a short time and the electromagnetic field of the Earth is disrupted. When the flow of light from the Sun is interrupted, nothing is normal. It allows for old entrenched patterns to be released and Cosmic energy to flow in which affects our energetic field allowing for change and awakening. At that time our Lightbodies will be activated with a potential to reorganize our molecular structures. Some say our DNA molecules are actually receptors of light and that much of our DNA has been inactivated by fear and are awaiting reactivation. Love is the activating force.

Eclipses always are harbingers of change and are most powerful in areas where they can be visibly seen. This eclipse is only visible in its totality in the United States so its impact is meant to be great here. It is being called the “Great American Eclipse.” Oscar Miro-Quesada, a Peruvian shaman and curandero, had an interesting insight about it. He said the eclipse is first visible over the Pacific Ocean where the last remaining islands of the lost continent of Lemuria lie, crosses over the North American continent and ends in the Atlantic over the where the few remaining islands of the lost continent of Atlantis lie. He said this is a reactivation of the wisdom of those two lost ancient cultures as well as teachings of the indigenous peoples of North America, the teachings of the value of all life, the interconnection of all beings, the sacredness of Mother Earth and our relationship to her.

In a Solar Eclipse, the Moon moves in front of the Sun and blocks its light. The Sun is four hundred times larger than the Moon but the Moon is four hundred times closer to the Earth so the Sun and the Moon appear the same size from our perspective. When the alignment is perfect, which includes other astronomical factors, we have a Total Solar Eclipse. The Sun represents consciousness; the Moon represents the Unconscious. It is the Dark Side of the Moon that faces the Sun so it is receiving the light. Thus, aspects of our deep unconscious, personal and collective, have the opportunity to come into our awareness.

This eclipse also activates the natal chart of the United States. The Moon in the natal chart of the USA, at 28 degrees of Aquarius, is opposed by this eclipse which is a strong activation. The more unconscious aspects of the USA are coming into the light as we see hate, which is really a form of fear, rising up all around us. This country was built on fear and violence toward other human beings. As the current paradigm is breaking down all of this old material is rising to the surface to be released as we shift into a higher level of consciousness and remember ourselves as multidimensional beings of love.

As this fear rises we can easily identify it, but how do we meet it? If we meet it with fear, nothing changes. Leo asks us to be lion hearted as these times require great courage. For we are not only meeting the shadow of the Collective Unconscious but our own shadow as well. We are being asked to have the courage to look deeply into our own hearts for any darkness we may carry. I recently had to look into my own heart and saw all the ways in which I have betrayed myself through poor choices while blaming others for my suffering.  By taking responsibility for our choices we give ourselves an opportunity to practice self-forgiveness and compassion. When we can meet ourselves with love we can meet others with love.

I recently read a really wonderful article from a young man who had been part of a hate group and speaks eloquently about hate and violence. “Being on the receiving end of violence never made me any less violent or filled with hate. What changed the course of my life was the profound courage extended to me by those I claimed to hate; their kindness, forgiveness and compassion destroyed my narrative of oppression… All of us human beings find what we seek in life. If we seek reasons to believe we’re persecuted, we’ll find them…. Fortunately, people I claimed to hate, such as a Jewish boss, a lesbian supervisor, and black and Latino co-workers, defied my hostility. They treated me with kindness when I least deserved it, but when I most needed it.” http://www.cnn.com/2017/08/15/opinions/ex-white-power-compassion-answer-michaelis-opinion/index.html. This young man left the hate group due to the kindness of those he believed he hated. We are being asked to have the courage to live from our hearts; to meet fear and hate with love. That does not mean we cannot stand up and refuse to accept behaviors of violence or hate. Setting good boundaries through non-violence is self-love. The Water Protectors at Standing Rock have shown us how to proceed with non-violent resistance through prayer and love.

The Sabian Symbol for Leo 29 degrees is: “A Mermaid Emerges from the Ocean Waves Ready for Rebirth in Human Form.” The ocean and water has long been a symbol of the Unconscious, personal and collective.  As we rise out of our personal unconscious we seek to be reborn as the embodiment of cosmic Love in human form. As we do our inner personal work for that rebirth into our true selves, we raise not only our own vibration but that of the collective as well.

There is a Grand Fire Trine which consists of Sun/Moon/Mars/North Node in Leo trine Uranus in Aries and Saturn in Sagittarius that is activating the question, “Who am I?” and “What is my direction going forward?” This aspect combined with the Solar Eclipse has guidance and information for us if we pay attention and take unexpected opportunities that may be provided. It is important to know that events usually happen within a 36 day period called the Eclipse cycle, which is 18 days before and after the eclipse, but I have seen them active for up to 4-6 weeks after the eclipse. It often takes months or years for effects of the eclipse to play out.

At this Solar Eclipse, through the activation of our Lightbodies and the release of fear that has masked who we are, the potential to remember and clarify who we really are is strong.  Astrologically, the Sun represents the face of Creator we wear in this incarnation and the divine gifts we bring. We are asked to follow our joy which brings us back into alignment with our true selves. Each of us are life force made manifest and shining beings of light with love to share.  Shine your light and light up the world with love! Remember that childhood song, “This little light of mine, I’m gonna let it shine, let it shine, let it shine.” The time to shine is now!

“The Universe only pretends to be made of matter. Secretly it is made of love.” Daniel Pinchbeck